Gareth is developing an “animated typewriter”. This typewriter will run a text adventure game that will explore uncertainty around trust and security of apparently mechanical objects. While mechanical and electromechanical devices are usually considered more “trustworthy”, our understanding of these devices is typically vague.

Gareth will present a talk on the challenges of working with different types of engineered devices, and the methods by which they can be adapted to be used as tools for games or other interactive pieces. 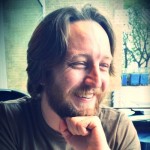 Gareth is a game designer, digital producer and artist. He has designed games for events such as Hide&Seek’s Weekender festival in 2012, the Wellcome Collection’s Wrong! Lates evening, and The Wild Rumpus.

He likes to work on projects that incorporate digital elements into the physical world, and his favourite works are those that transform existing electronic artefacts for alternative uses and purposes.

Henry Cooke – The Throne at Game of Crowns 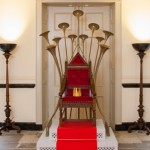 Henry from East London Kinetics talks about the development of an interactive artwork commissioned by Hide&Seek and Kensington Palace as part of their Christmas festivities. He’ll talk about the process that went into realising the piece, a three metre high talking throne, including a look at the technology behind it and a run through the build itself from initial concepts to final installation.

East London Kinetics (ELK to its friends) is a physical/digital design studio based in Hackney. It was founded in 2013 by Tim Burrell-Saward, a 3D designer and maker, and Henry Cooke, a technologist with a history in building games, transmedia apps and interaction design.

According to Sarah, the stage is a tricky place to deploy a machine with an unusual interface. Your audience may be encountering the interface for the first time. They’ll have to grasp its function as the music unfolds, even though they can only see and hear it in action, rather than get their own hands on it. These days, musicians often have to face the challenge of laptop-based interfaces, where so much of the function is embedded in invisible, intangible code. As Sarah talks about these issues and her experience with unusual machines on stage, she looks at the importance of ‘coupling’ – in particular, the audience’s sense of cause and effect between a musician’s actions and sound. What are we gaining – or losing – by loosening this coupling? Does it matter if the audience have no intuitive sense of the musician’s influence on the music? And how can we deploy coupling to turn any gig into an unforgettable event – one which could never be replaced simply by listening to recorded music at home. 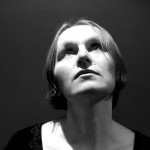 A composer, multi-instrumentalist, roboticist and historian of sound and the uncanny. Sarah’s live performance – somewhere between cabaret and experimental electronics – explores her obsessions with defunct machinery, faded variety acts and European folklore. She’s composed music for the BFI and The National Theatre and been seen and heard on national radio and at festivals around the UK. Awarded Most Groundbreaking Act of Brighton Festival and Fringe 2013.

companies that write essays for students