Bees in a Tin 2015 features a massively exciting range of performances, talks, workshops and other curious things. Here are the people making it happen… 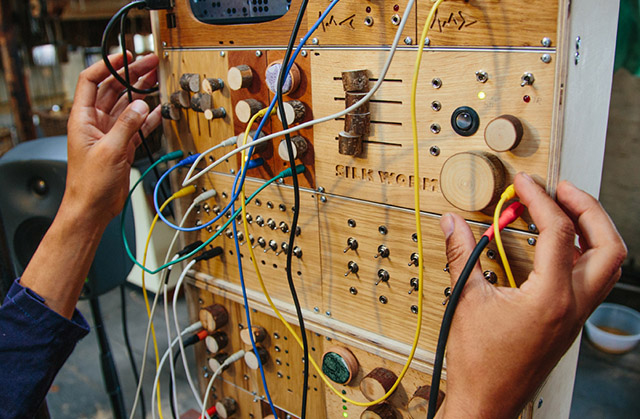 Owl Project will talk about how they use basic materials and electronics to craft instruments and interfaces. They will reflect on how they seek to open creative sonic possibilities through constraints, and also show examples of collaborative design and production.

Alongside making numerous stand alone instruments Owl Project have made a number of works where craft and mechanical processes dictate the outcome of the music, these have included Sound Lathe, ~Flow and Play the Jacquard Loom. They will discuss the ideas and processes behind these works and show the workings behind their new All Ears Commission – Optikit.

Owl Project is a collaborative group of artists consisting of Simon Blackmore, Antony Hall and Steve Symons. They work with wood and electronics to fuse sculpture and sound art, creating music making machines, interfaces and objects which intermix pre-steam and digital technologies. Drawing on influences such as 70’s synthesiser culture, DIY woodworking and current digital crafts, the resulting artwork is a quirky and intriguing critique of the allure and production of technology. 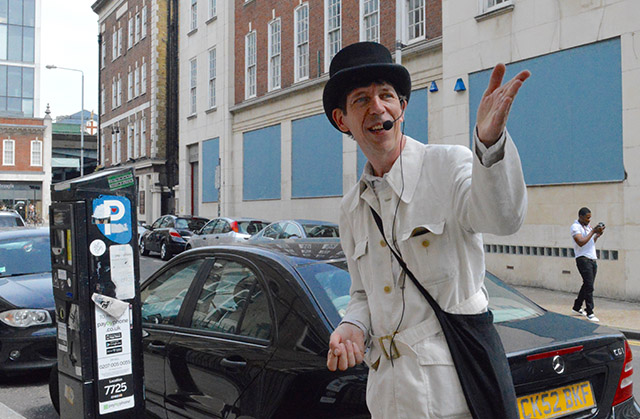 Bill Aitchison – The Tour of All Tours

The Tour of All Tours is a talk and virtual tour by artist and conceptual tour guide Bill Aitchison. For the last two and a half years he has been taking guided tours of every sort around the world and recycling them by giving his own tours of tours. These are a parasitic sort of guided tour that critically, and with a distinctive dry humour, explore the political, social and cultural subtexts of tourism.

Bill Aitchison is a performance artist who is based between the UK and China. He has presented his work in galleries, theatres and festivals in Europe, Asia, America and The Middle East. Bill holds a practice-based PhD from Goldsmiths College, has published critical and creative texts in several countries, made several works for radio and is associate research fellow at Birkbeck College, University of London. 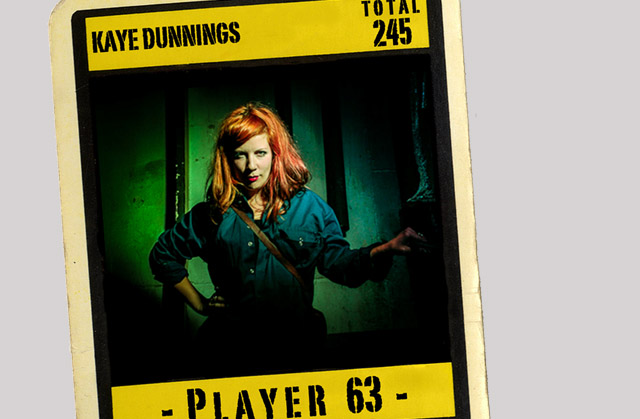 This collaborative project is seeking to improve audience engagement and agency within immersive performance through the use of technology. In this playtest we invite you to take part in our experiments-in-progress, either as protagonist in a responsive storyline, or as audience member -watching and perhaps influencing the process. We will look at choose-your-own and generative approaches to responsive theatre, and share our discoveries so far.

Pan Studio design and build experiences, and help others do the same. Makers of playful digital systems including Run An Empire and Hello Lamp Post. 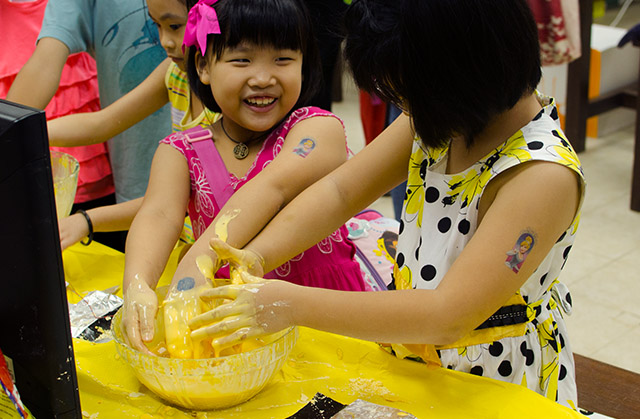 I’m going to talk about design principles I’ve learnt from making videogames that involve custom physical hardware. Games like : Punch The Custard, a game about punching a bowl of custard, Fabulous Beasts, a game about competing for resources where you make moves by stacking blocks in a tower and Tenya Wanya Teens, a game about being a teenage boy, pressing the wrong button and accidentally peeing in the woods.

George Buckenham is a freelance game designer, programmer and curator. He’s currently working on Fabulous Beasts, an iOS game involving stacking RFID-enabled blocks in a precarious tower. He recently made Jumpotron, an exhibit at the National Videogame Arcade and was technical lead on Mutazione, a gorgeous narrative-led game with Die Gute Fabrik. And alongside all of that, he’s one of the founders of Wild Rumpus, a touring videogame club night. 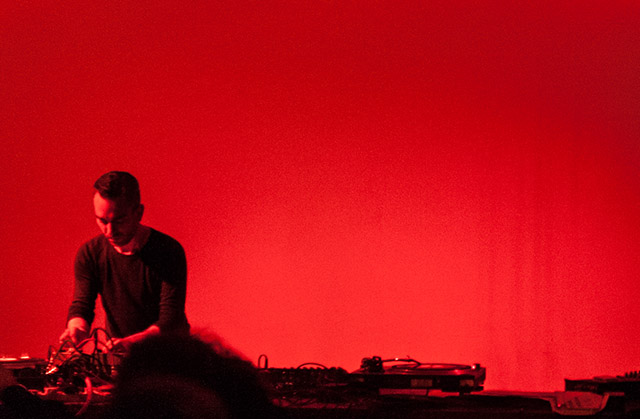 Heavily phasing live sound from custom dubplates, acetates, test pressings and low-frequency oscillators are used to directly power live video projection that works on principles of colour shadows discovered by Edwin Land – the inventor of Polaroid photography and sunglasses. As much a physical exploration of architecture as it is of the audience’s bodies, both through sound and the perceptual psychology of colour and light. Comes with a warning for those susceptible to flickering lights.

Robert Curgenven is a composer/sound artist drawing on the physicality of sound – not just the physical impact on the body but the way in which the auditory can shape our perception of space and the flow of time. The Wire surmises that “behind the music—to these ears at any rate—lurk such [disparate] presences as Alvin Lucier, King Tubby, Murray Schaefer and Eliane Radigue.” 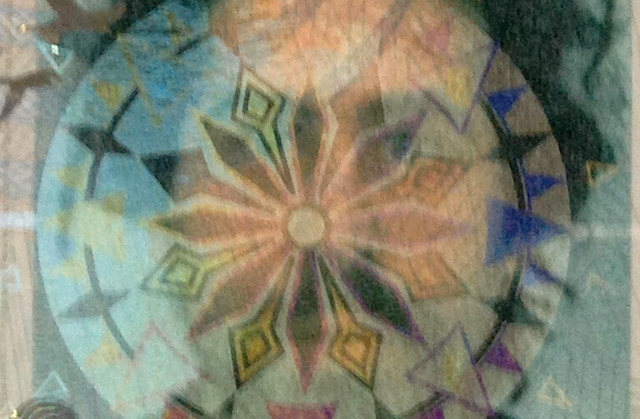 Simon Farid – How To Impersonate a Plain Clothes Police Officer

We are going to commit a crime. Impersonating a police officer is against the law, even though we know they impersonate us (the public) all the time. In this workshop we’ll look to rebalance this by impersonating a plain-clothes police officer, something that cannot really be identified. Collectively examining, mimicking and enacting covert police practices will help us to better counter surveillance on ourselves and to look at notional public space in a new way.

Simon is a visual artist interested in the relationship between administrative identity and the body it purports to codify and represent. Taking on the role of the hacker or trickster, he looks to playfully intervene in the identity-generation process, operating as ‘other people’ and developing ways to counter and disrupt emerging identity confirmation mechanisms.

This work manifests in performance, installation, academia, online and public workshops and it is activist in spirit. 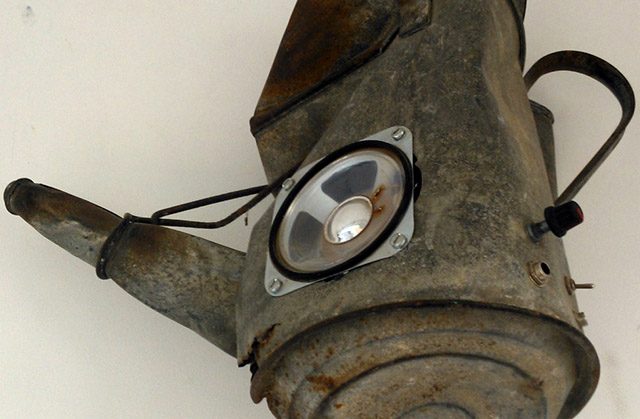 A ‘show and tell’/performance session, showcasing a variety of hand-built/salvaged musical-instruments and sound-making devices. This will include: chip-based synthesisers housed in Kodak Brownie cameras, synths made from old paraffin/oil cans along with a rusty-broken bucket – now re-envisioned as the Atari-Punk-Bucket – all played through a purpose-built ‘Farmyard Sound System’. He will share his working methods, and demonstrate both the playability and design of various devices and sound-systems. 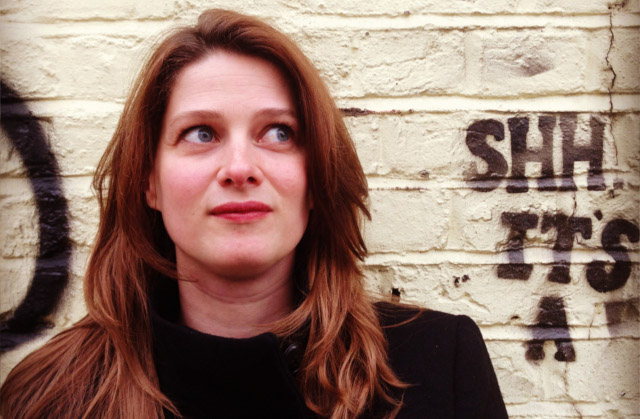 Annette Mees started out at Royal Academy of the Arts in The Netherlands, while living in the country’s hackers HQ. This combination led to an artistic practice blending elements from theatre, gaming, art and digital culture and she is expert in the development of new interactive narratives and experiential digital models. For the last 6 years she has been an artist director of Coney, where she develops, produces and directs large-scale projects. She is about to start an international project in which she will aim to predict the next 50 years with the help of 15-65 year olds from across the globe. 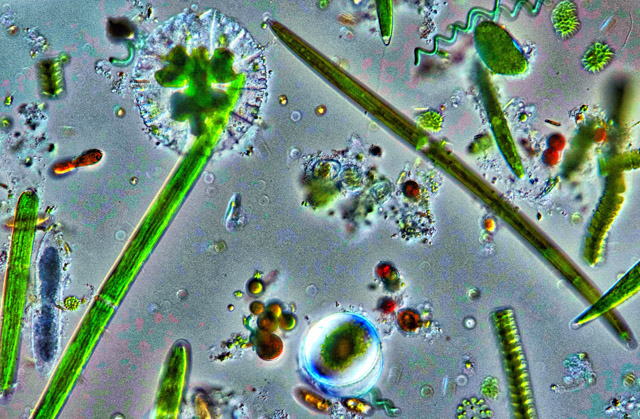 In the familiar settings of our urban environments, microorganisms have established thriving and complex ecologies that we almost always overlook. This will be a unique microbiologically informed walk and mobile workshop, which will explore the importance of this the urban microbiology, using examples found in the environment local to the Bees In A Tin event. Expect to learn about: the hidden signatures of microbial life, portable microscopy, and DIY microbiology.

Dr Simon Park is a Senior Teaching Fellow at the University of Surrey, where he teaches Microbiology and Molecular Biology. He also works at the fertile intersection between art and science and here, he has been involved in many innovative microbiology projects. He has also been a pioneer of Kitchen Microbiology, and through this, has empowered many enthusiasts and artists to carryout microbiology safely at home, using readily available off-the-shelf ingredients. 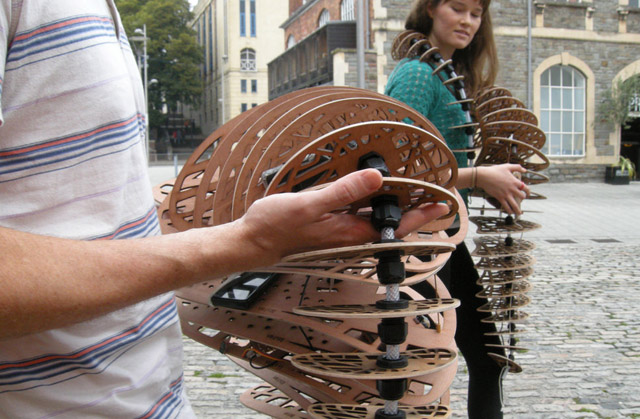 An opportunity to meet a family of prototype animatronic ‘critters’ from the Colony project – an investigation into making the behaviour of radio waves in urban environments both tangible and playful.

When fully developed, the critters will move differently in response to the quality of the GPS signals they receive as well as how connected the Colony remains as it moves through the city. 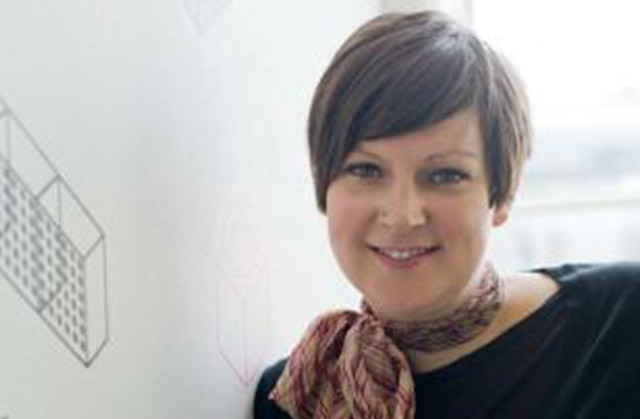 Clare Reddington is the Creative Director of Watershed. Clare leads the Pervasive Media Studio, engagement and cinema teams, working with industry, academic and creative partners to support talent and champion new ideas. Clare was a finalist in the British Council’s UK Young Interactive Entrepreneur 2009 and featured in Wired magazine’s 100 people who shape the Wired world. Clare is also Executive Producer of REACT hub and a Visiting Professor at University of the West of England. 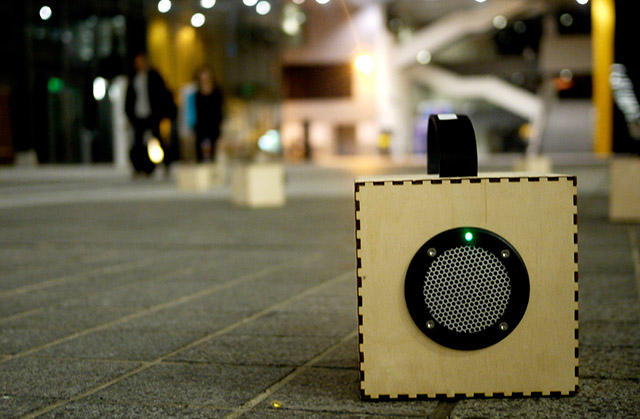 A Folded Path is a pedestrian speaker symphony; a soundtrack for a city carried through the streets by a participating audience.

Comprising location sensitive portable loudspeakers – each playing a different element of the music – audience groups take different but sometimes overlapping routes through the city. The GPS position of the speaker causes different sections to be played and the movement of the people within the group changes the acoustic relationship of the composition: the audience become the orchestra.

Duncan is a director of Circumstance, an artists collective that creates cinematic experiences in uncontrolled environments. Established in 2010 in Bristol(UK), its current directors are Tom Abba, Sarah Anderson and Duncan Speakman.

From mass participation subtlemobs and intimate in-ear stories, to books, and installations. Using both emergent and commonplace technology, we try to make films without cameras. We explore the politics of mobile technology and public space, wrapping our questions in melancholy and romance.

We also have an exclusive performance of A Folded Path for Bees in a Tin attendees only. 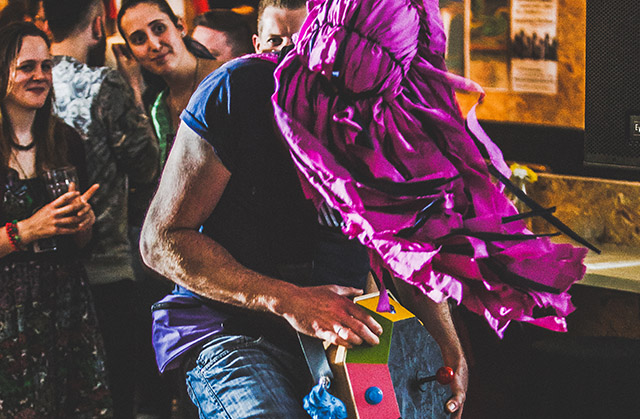 A live Swoomptheeng performance showcasing their over-sized, semi-organic and brightly-coloured sculpted MIDI instruments which illustrate their influences from 80’s TV, 90’s rave and contemporary art; to folk-art, hacking and hobbyist cultures. Followed by a presentation of how the instruments work and the innovative techniques used to interface with music software such as Traktor via MIDI joysticks, Arduino and other electrical components. 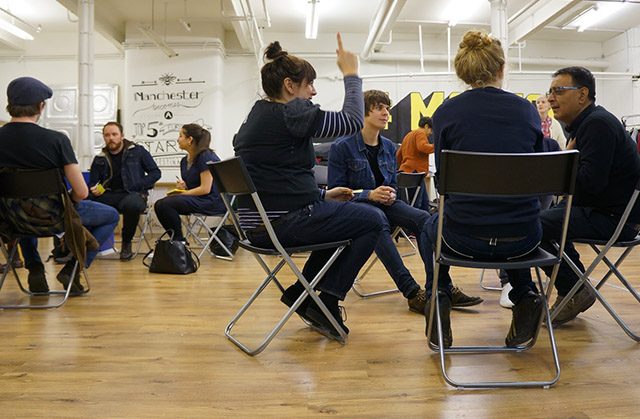 Rebecca Taylor – The Rooftop Project: The Story So Far…

The Rooftop Project is an experimental project through which highly rewarding and transformational learning experiences are emerging. Opening with a lively presentation of the story so far, this session will then invite you to discuss ‘our’ awareness of doing projects such as these and pose questions such as – are we doing it for good or glory? And, when multiple design disciplines and curatorial practices meet how responsible are we for the process of critical reflection?

With a background in creative communications; cultural and commercial brand partnerships; event and educational programming, Rebecca is currently an ESPRC funded doctoral researcher at HighWire, Lancaster University and actively campaigns for green spaces in Manchester’s City Centre. As Partner of The Curiosity Bureau – a partnership and associates academy that promotes space to be curious – Rebecca’s doctoral research is focused on ‘The Rooftop Project’ – a space to be curious about designing with people.