What? See the main Salons page
Where? The Bond Co., Fazeley Street – come to reception and they’ll show you which room we’re in.
When? 1pm to 5pm.
Who? Co-curated with Sarah Ellis, Head of Digital Development, RSC; guest speaker TBC
How much? Free! But you must book a place through Eventbrite

NB: Wheelchair accessibility for this month’s Salon is less good due to room availability. If this affects you please get in touch with us ASAP so we can have any conversations that need having and do what we can to make sure you can still take part as fully as possible.

Our Guest Speakers for the September Salon are Davy and Kristin McGuire.

The McGuires head an award winning creative studio that design unique visual experiences through art installations and theatrical projects. As well as creating bespoke projects for cultural institutions and brands, they produce and sell their own works through international galleries.
Davy and Kristin‘s hybrid art works are delicate, filigree fantasies built with fragile materials that are momentarily brought to life through digital projections and silent storytelling.

Created in 2009, The Icebook was the world‘s first projection mapped pop-up book which has become an international hit, both online and on tour. It has been invited to tour to more than 13 different countries over 3 continents and received more than half a million views online.

Winners of The Oxford Samuel Beckett Theatre Trust Award 2013, Davy & Kristin McGuire‘s work has included theatre productions such as The Icebook and the atmospheric stage adaptation of popular fantasy novel, Howl’s Moving Castle. Their latest award winning theatre show The Paper Architect premiered in July 2013 at the Barbican London and received the Helpmann Award for Best Visual Theatre Production after touring Australia in 2015.

Davy’s background is in theatre and film whereas Kristin has trained as a dancer who has performed with many international companies including Cirque du Soleil, she is currently a dancer with the Mark Bruce Company.

‘Magical and exquisitely crafted, Davy and Kristin McGuire’s […] universe is full of visual wonders.’
The Guardian

Our September Salon is co-curated with Sarah Ellis, Head of Digital Development, RSC. As such we’ll have more of a focus on theatre and performance, but still in the context of interdisciplinary practice. 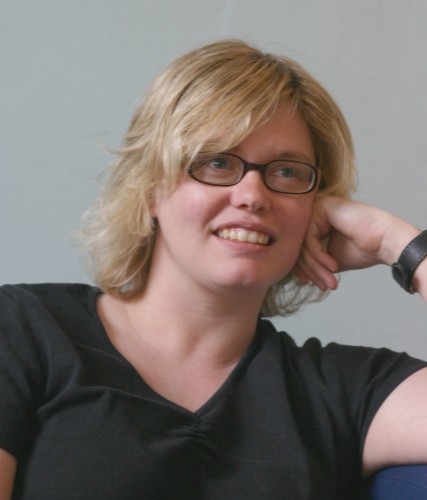 Sarah Ellis is an award winning producer currently working as Head of Digital Development for the Royal Shakespeare Company to explore new artistic initiatives and partnerships. In 2013 she was listed in the top 100 most influential people working in Gaming and Technology by The Hospital Club and Guardian Culture Professionals. In partnership with Google’s Creative Lab, she recently produced Midsummer Night’s Dreaming which won two Lovie Awards for Innovation and Experimentation. In 2012, she produced myShakespeare an online artistic commissioning platform for the World Shakespeare Festival. In 2011, she was the producer of the RSC’s new work Adelaide Road, which mixed live performance with an app and website map. As a theatre and spoken word producer, she has worked with the Old Vic Tunnels, Battersea Arts Centre, Birmingham REP, Contact, Freeword, Improbable, Southbank Centre, Soho Theatre, and Shunt. She has been Head of Creative Programmes at the Albany Theatre and Programme Manager for Apples & Snakes, England’s leading performance poetry organisation. She is a regular speaker and commentator on digital arts practice – http://www.theguardian.com/culture-professionals-network/2015/jan/20/rsc-digital-development-tech-shakespeare

What are you working on?

A core part of the Salons is giving people a chance to talk about, demo and ask questions of the projects they’re working on at the moment. That means you? How can a room full of curious, intelligent people help you move forward?

Confirmed so far are Sophie and Anna who, as One Five West, will be displaying and discussing some of their work, seeking feedback ahead of a residency they’ll be doing.

Get in touch and let us know if you’d like to harness the power of a many and varied audience to feed into your work.