A week or so on and I’m sat trying to sum up everything that happened at Bees in a Tin. That was a day that was very full of stuff! I’m going to mostly let the photos do the talking here, but you can also listen to the audio from the presentations and read people’s Tweets from the gathering too.

People had been instructed to come and find us up on the second floor. Once through the doors there were badges to be customised and then we were into the auditorium for the first session of presentations, (chaired by Clare Reddington). 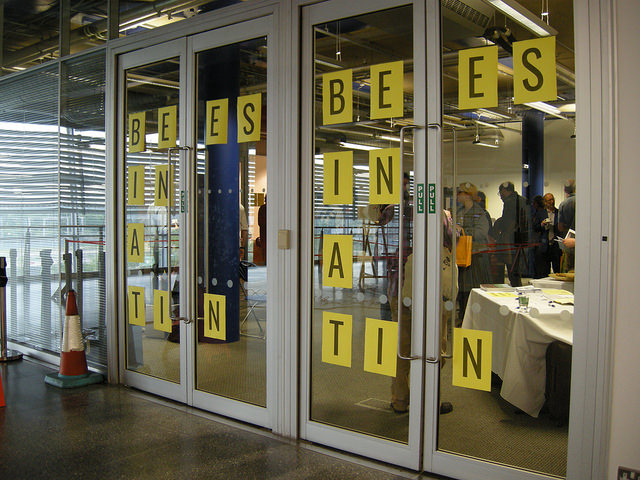 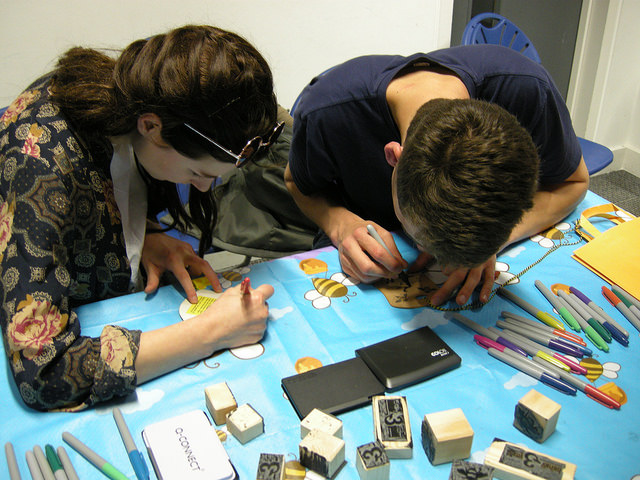 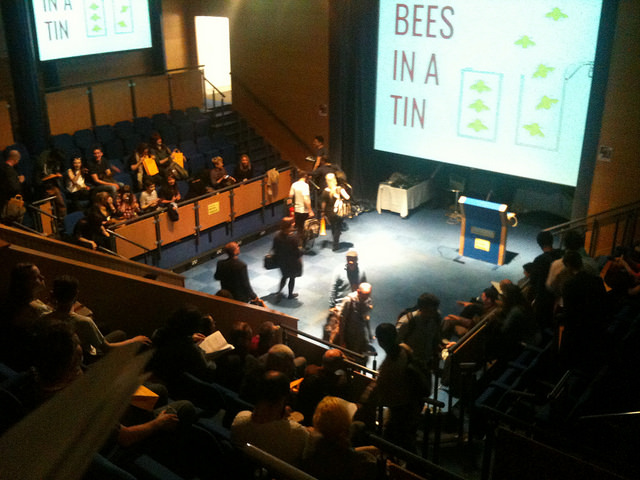 Bees in a Tin gets started. Photo: Katie Day

This session started off with Bill Aitchison taking us to Beijing via Stuttgart and a glimpse at the possibilities for transposing tour content and expectations between physical locations. This was followed by Duncan Speakman of Circumstance talking about cinematic experiences, rubber bands and marking out time. Rebecca Taylor then talked about a rooftop in Manchester, cranes, and questioning whether we design for good or for glory. 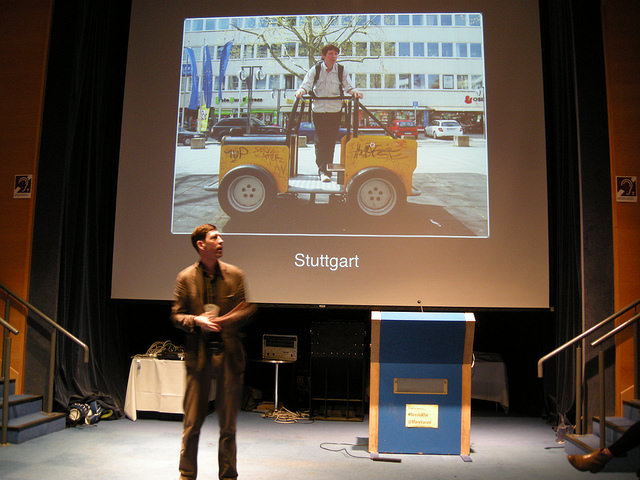 Bill Aitchison – The Tour of All Tours. Photo: Nikki Pugh 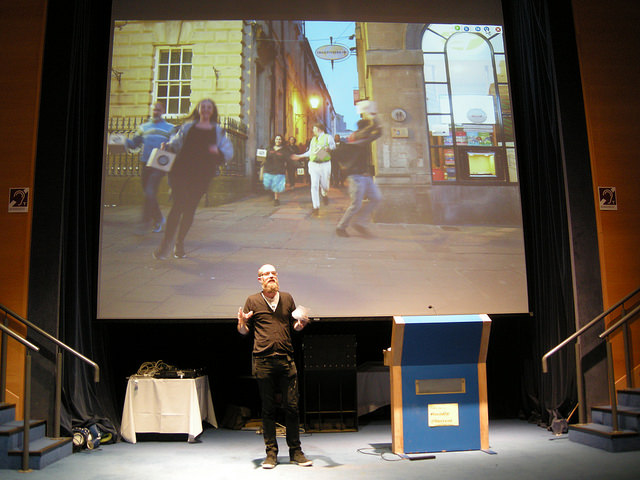 Duncan Speakman – The social composition of A Folded Path and the myth of interactivity. Photo: Nikki Pugh 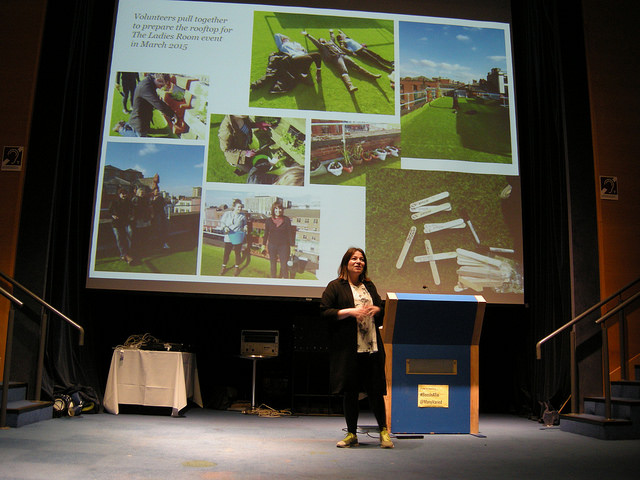 After lunch was our smörgåsbord of workshops and other interesting things: Punch the Custard saw a lot more action; Simon Park revealed an invisible world of microbes; Critters were met; Farmer Glitch bleeped and blooped; Robert Curgenven got a bit violent on our retinas (with nice things); Simon Farid instigated a small criminality; and Aste Amundsen et al playtested audience-responsive theatre systems. 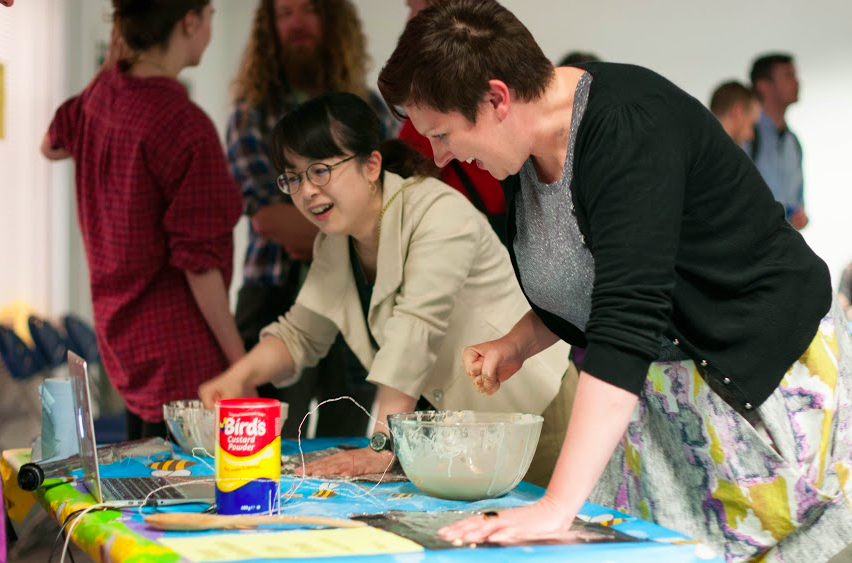 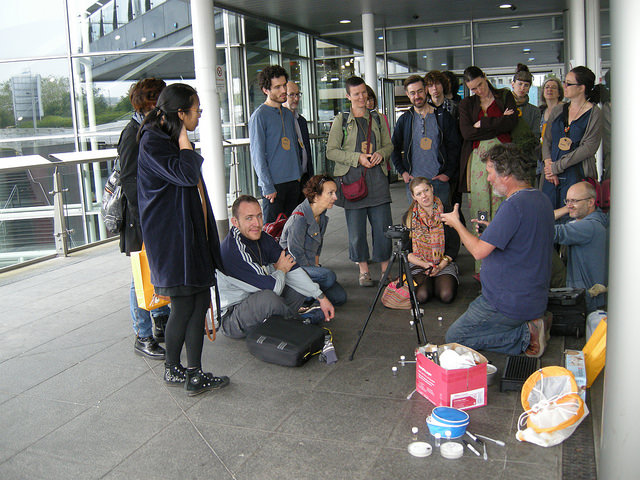 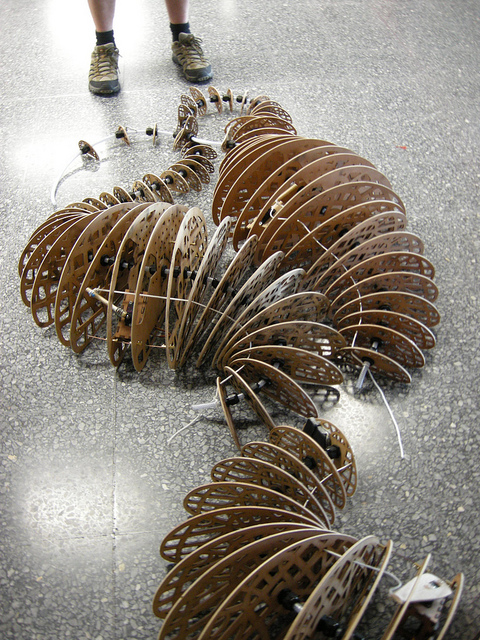 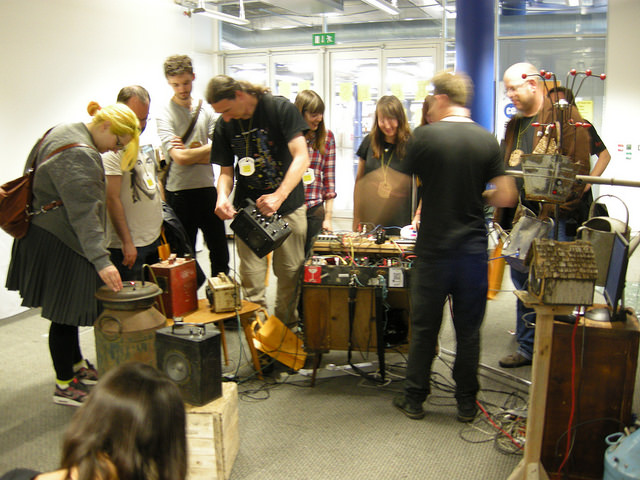 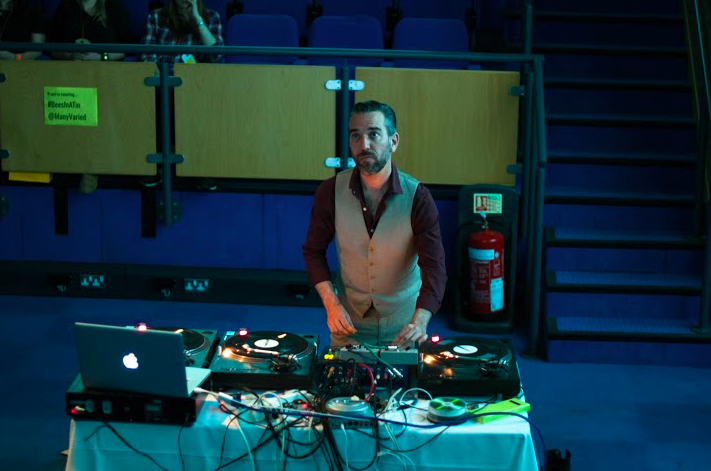 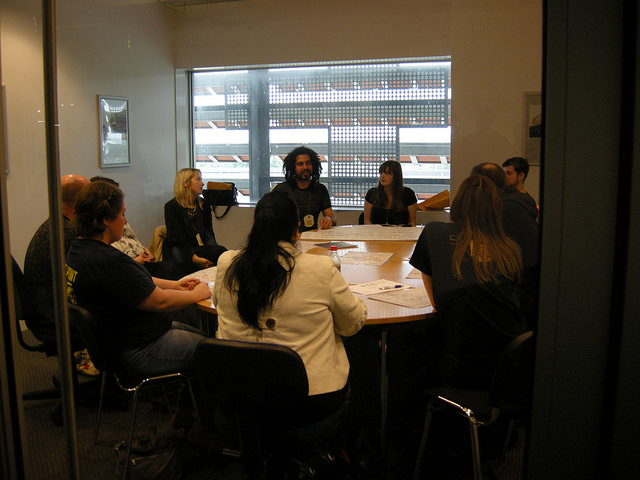 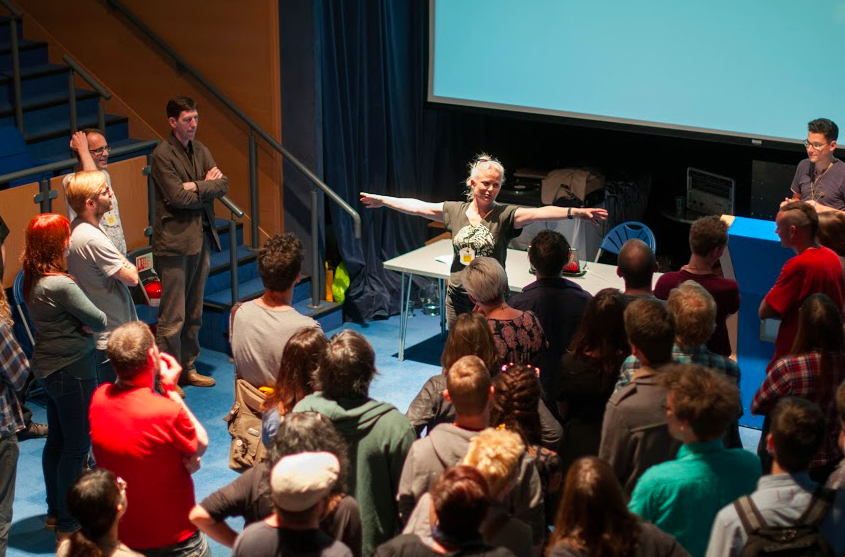 After all that we all reconvened in the auditorium again for the afternoon session of presentations, this time chaired by Annette Mees. Swoomptheeng smashed us with the drum and bass, George reminded us to pay attention (also that carpentry is a difficult thing) and Owl Project keynoted on the theme of crafting interfaces. 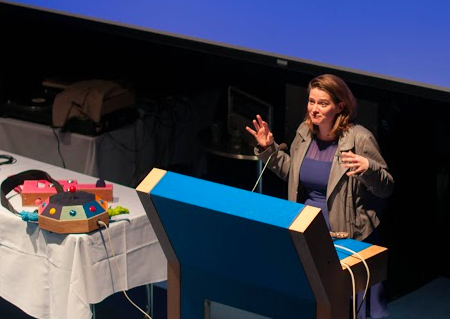 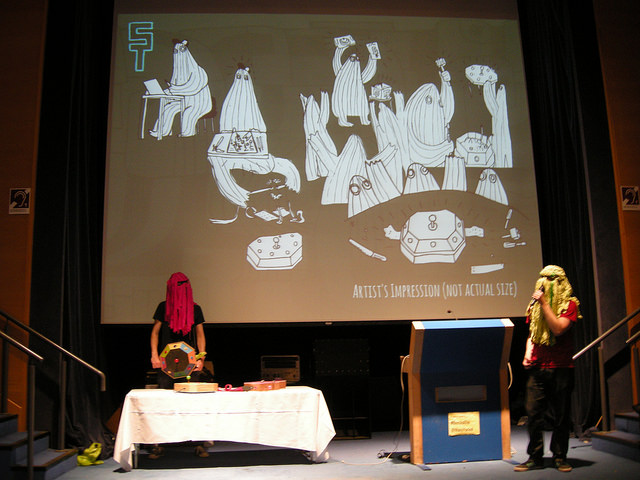 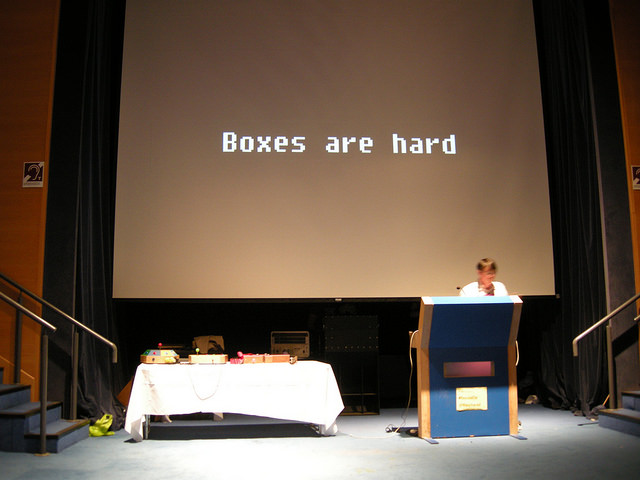 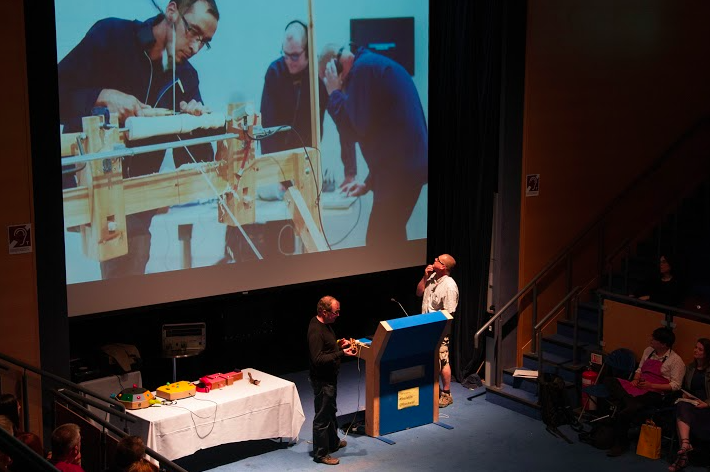 This is an image that will stay with me for a while! 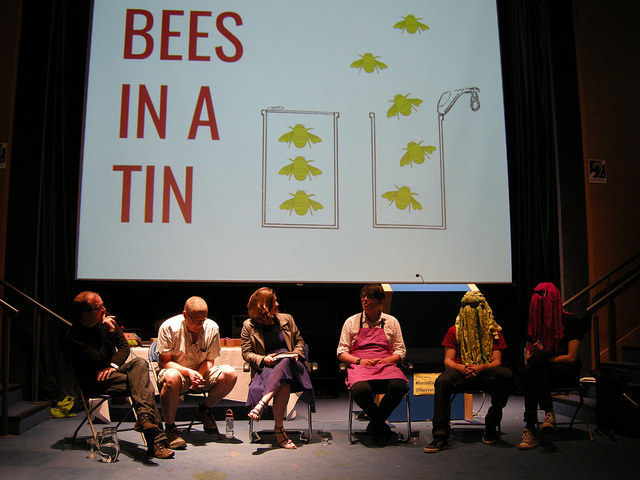 For more photos, take a look at our set on Flickr.

Why is it important that we bring together all this stuff in the same place? Rebecca Taylor, one of the presenters had this to say:

It really was so refreshing to be amongst folk who are all doing creative and exciting things that, whilst our projects can so often feel exciting, they can therefore also (sometimes) feel uncomfortable too – especially if they are challenging ‘the norm’. It is with that in mind that having a space like Bees in a Tin to gather and play, and share, is just simply, well… essential.

And this from Aste, who ran one of the smörgåsbord activities:

We are asking some really big questions and it’s so valuable for us to have an engaged enthusiastic audience to explore them with.

Many, many thanks to all the presenters, chairs and the engaged enthusiastic audience who made this day such a successful gathering.

There were also lots of people behind the scenes who helped make everything happen: Seb Harding, Kim Wall, Leon Trimble and our volunteer team Helen, Chris and Emma.

We’ve also had masses of support from all our partner organisations: working with Supersonic festival brought aural curiosities and more; Millennium Point and Thinktank provided space and specialist staff; and Arts Council, Creative Enterprise and Birmingham City University provided the funding that made it all possible.

Look back again at those quotes from Aste and Rebecca. If you make things and if those words resonate with you, then please do join us for the 5 Salons we’re running over the course of the rest of the year. Bees in a Tin was just the beginning!

Snippets from the hive mind, because it just wasn’t possible for us to document all of the things ourselves…

We’ve uploaded the audio of the presentations from Bees in a Tin to Soundcloud. You can either listen to them there, use the player below or download them. Enjoy!

(The sound quality starts off a bit wonky on the first one, but it gets better about a minute in.)

Many thanks to Chris for twiddling the knobs and sliders in the booth all day, and to Kim for preparing the audio files of the recordings.

We’re working in partnership with Supersonic this year, so one of our key messages about Bees in a Tin 2015 is DON’T GO HOME AFTERWARDS!

Well, if you live locally it might be okay, but if you’re travelling from further afield you might want to consider booking a night or two in Birmingham so you can have a whole weekend of experimental music and arts. Supersonic have listed some accommodation options including some discounted rates on their website at http://www.supersonicfestival.com/info/hotels/

Here’s a bit more about Supersonic, full details on their website.

“Supersonic – a celebration of the expressive, challenging and generally out there“ The Times

Learn to make aleatory music using Hexadic System, see a masquerade-like performance by artist-composer Gazelle Twin, take part in a pedestrian speaker symphony led by Circumstance and marvel at the Moog Sound Lab. Supersonic has secured its experimental reputation with over 10 years of consistently innovative and explosive concoctions of visual installations, films, exhibitions and music. Guaranteed to open your eyes and ears to music and art outside the predictable genre labels and familiar performance spaces, Supersonic thrives on the spirit of adventure and discovery.

Weekend tickets are on sale via http://www.supersonicfestival.com

CALL FOR EXCITING & INTERESTING THINGS! Do you do exciting and (or) interesting things? Then this is for you!

Bees in a Tin is a gathering happening on the 12th of June 2015 for interesting and exciting people who make unique interfaces for the world around them. This year it’s happening in partnership with Supersonic as part of their annual festival of experimental music and art.

And we’re currently looking for people to present… interesting and exciting things, experiences, performances, talks, artefacts, ideas and other nouns, at the event.

If you have devised (or are devising) a novel way of interacting with your surroundings that makes people stop, think or just go “wow!”, then we would like to be in the same room as you. Your project could be a performance piece; guided walk; interactive object; data visualisation; science experiment or something completely different. Surprise us!

We’ve started the programming with a keynote presentation from the extraordinary Owl Project. What happens next is up to you.

We’ll be in a space that can accommodate talks, workshops and/or playtesting and feedback on work in progress. Tell us how you’d like to feed into the day and we’ll do our best to squeeze in as much amazing stuff as we can.

If you’d like to submit something to our selection panel (Nikki Pugh, Katie Day and Lisa Meyer), please download and complete the expression of interest from the link below and send it and any supporting images (less than 3MB total size) to bees2015 [at] manyandvaried [dot] org [dot] uk by 5pm on the 29th of April.

Please rename the file with your first and surname at the beginning of the filename. For example: ‘Joe-Bloggs–Bees-in-a-Tin-2015-EOI’

Bees in a Tin is supported using public funding by the National Lottery through Arts Council England. Presented in partnership with Supersonic.

Bees in a Tin is back!

Many & Varied in partnership with Supersonic are delighted to present Bees in a Tin, as part of Supersonic Festival. Save the date of June the 12th in your diary!

We’ll be following a similar format to last year’s gathering in that the day will be an interdisciplinary mix of new experiences, performances, talks, artefacts and ideas based around the theme of interesting and exciting people who make unique interfaces for the world around them.

Here’s what people had to say about last year:

“The organisers shaped and presented the programme sensitively in a way that allowed interactive thrones to sit alongside the formation of limestone in Cotswold rivers, a life story told through the medium of punk and disco, and the search for secret messages in the branches of trees. Bees in a Tin is one of those unexpected treasures I could recommend to pretty much everyone I know, regardless of their usual interests.”
Verity McIntosh, Pervasive Media Studio Producer

“Bees in a Tin was easily one of the best events I attended in 2014. A lovely crowd of clever, curious and friendly people and a really interesting and inspiring spread of speakers and workshops.”
Henry Cooke, technologist, East London Kinetics

This year one day just isn’t enough! We’ll also be running a series of salons on First Fridays through until December. 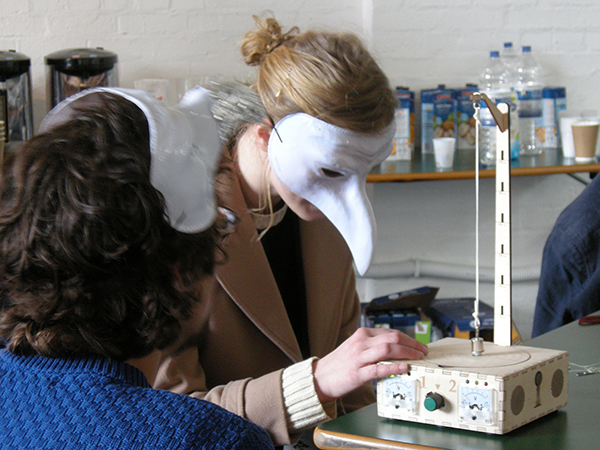